Lessons in Social Media Marketing from the 2015 British Election

The first question posed to the first panel at Social Media World Forum being held at the very cool, cavernous Vinopolis, a wine-tasting venue and wine museum near the London bridge, seemed to this American chair of day one of the event an odd question:  “2015 – Was it the first social media British election?”  How could it be, I wondered.

Five hundred attendees, many of the brightest minds and biggest brands (Coca-Cola, GE, Ford, American Express, Conde Nast) in digital and social media marketing from throughout Europe, crammed into a large hall at Vinopolis to hear the answer.  Moderating the panel, I decided to pose the question first to the audience.  “Was 2015 the first British social media election?”  Few hands went up. 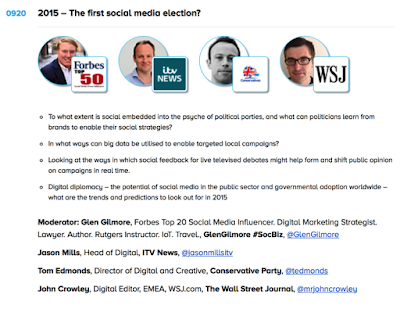 Turning to my esteemed panel, which included no less a personage than the young Tom Edmonds, who had just finished his highly-successful tour of duty as the Director of Digital and Creative for the Conservative Party (yes, my fellow Americans, that means he’s the guy who headed the reelection of Prime Minister David Cameron in the digital and social space), Jason Mills, head of Digital at ITV News, a fast-growing online news service, and John Crowley, Digital Editor for Europe, the Middle East and Africa, for a traditional and evolving news media news outlet – you may have heard of it:  The Wall Street Journal.

Tom Edwards, who can neither hide his youthfulness nor his keen intellect, dispatched the question with complete candor:  “We really didn’t know what we were doing before.  We were making funny videos and things like that.  This time, we knew what we were doing.”

It’s a whole new world now.  Like Gandalf the Grey turning serious, Edwards explained that going into the election, “We knew who we had to move and we moved them with social media.”  Edwards explained that it wasn’t all digital.  He was quick to credit solid, traditional polling with giving the campaign the insights it needed to target its paid social media marketing to drive votes.

Revealing some of his magic, Edwards said, “We knew who the swing voters were, what they cared about, and we messaged them with that.”

What can brands learn from politicians
to improve social media marketing?

“What can politicians learn from brands to improve their social strategies,” was supposed to have been one of the questions addressed by the panel.  Coming off his solid win from the election, Edmonds suggested that the question be turned on its head to ask what brands could learn from politicians (or, more precisely, digital campaign handlers) to drive the results they want.  (No arguing with success.)

“It’s all about the data, stupid.”

Edmonds answer on how brands might find more success with their online marketing activities?  Start with good data.  Message based on the data.  Be precise about your targeting and messaging.  Be agile.  Personalize your message.  Invest in social where you see results.  (Yes, Edmonds has started his own digital marketing firm.  He is certainly available for campaigns locally or globally.  But, as he pointed out, what he did for a political campaign, he can probably do for a commercial brand in a marketing campaign as well!)

The Wall Street Journal “Gets” Social

Not leaving the field of digital innovation to social media savvy political consultants, the Wall Street Journal dove into the 2015 British election cycle with its ever high-quality content, this time, however, geared for a readership accustomed to getting its content online in ways that visualize content and reward engagement.

What does going digital mean for a
stogy old news service like WSJ?
Animation, Games and Social Sharing, of course!

Explain the basics first.  The WSJ always does an excellent job of providing its readers with a solid body of information to understand both the basics and intricacies of big issues.  Recognizing that many readers from outside the UK would have an interest in the British election, the WSJ decided to provide content that would explain the British electoral process to outsiders.

Er, don’t be surprised by who gravitates to your basic content, when you make it crisp, visual and fun.  “What was surprising for the Journal was that our election explainers got a big social engagement from the UK, said Crowley, a journalist who is clearly excited about growing his readership through innovation and digital.

“A British audience who doesn't follow the ins and outs of parliamentary politics was keen to find out what a ‘hung parliament’ actually means – even if it didn’t eventually happen,” said Crowley.  “Sometimes we’re guilty of assuming when we’re in the trenches that the readership are well-acquainted with what these terms mean. This mobile-friendly animation worked very well for us and was shared widely.”

We all love a game.  “We also played around with formats and created a ‘game' to pair up the parties,” Crowley said.  “This did very well for us on social and also served a way to explain what could happen.”  Readers were invited to guess how the parties might align themselves in the upcoming election and the game they played gave them instant feedback on how well they did in their pairings.

It was supposed to be a close election.  It wasn’t.  How could everyone be so wrong when social media is so good at sentiment analysis?

Mulling over the point, there seemed to be a sentiment (borrowing a poor pun first pulled by Crowley) that it may not have been that the data shared on social was poor or inadequate, but that the analysis was lacking.

Social media gets good grades for news and driving engagement surrounding live events.  Though Mills lamented the poor social media analysis that took place in the British election, he noted that social media was quite good as a tool “gather news” and “to drive engagement and content.”

Better pick up your pace!  Mills said that for brands and parties, “the instant ability to react is getting more and more important.”

Bonus takeaway:  Uber-Proof Yourself!  This wasn’t mentioned directly in the panel on the British election, but it became a theme throughout day one of Social Media World Forum and was also the essence of the British elections panel as well:  Uber-proof yourself, your campaign, your consultancy, your business.  Learn to be agile and digital or you won’t make it in politics or the marketplace!

What did I miss?  I’d love to hear from you if you think I’ve missed any of the lessons from the 2015 British election.