Social Media for Hotels – Why It Matters

Hotel Nikko in San Francisco – A Superior and Social Hotel

I was enjoying the Hotel Nikko the moment I checked in:  the friendliness of the staff, the wonderfully luxurious beds, the nice touches to their room service.

I then looked for them on Twitter and sent out a tweet saying how much I was enjoying the hotel.

Hotel Nikko, in San Francisco, has a Twitter profile that boldly tells its guests that they may tweet the hotel “for any requests.”  Nice. 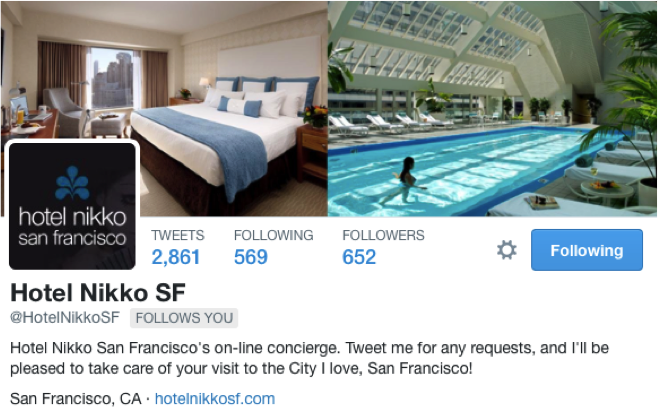 When I saw @HotelNikkoSF's invitation that I could tweet it with any requests, I wondered how long it would take to get a response and what type of response I might get from the tweet I had sent.  It didn’t take long.  Within moments of my tweet, I saw what I had sent had been retweeted by the hotel with a kind note:

A Fruit Plate and a Handwritten Note – A HANDWRITTEN NOTE!

After a few friendly exchange via Twitter, there was a knock at my door.  I was delivered a complimentary plate of fruit and a handwritten note from the social media manager welcoming me to the hotel.  A HANDWRITTEN NOTE!

Social media will amplify good or bad.  In the case of the Nikko, there is much to celebrate.  They don’t cut any corners in their attention to hospitality.

I had to find out more about the magic behind Nikko's social media presence, so I sent a tweet asking if I could have a meeting.  A tweet came back, gladly agreeing to meet.

Dani Ortega, social media manager for the Nikko, explained that at one point the hotel relied on interns for its social media engagement.  Then came a realization, she said, “you have to be invested in the hotel and in others – with a passion for the hotel.”

“It’s not that our interns didn’t have a passion for the hotel,” Ortega went on to say, but it was clear that experience matters as well.

Joseph Curran, Vice President of Marketing for the Nikko San Francisco, who joined us for our talk about the hotel’s social media efforts, elaborated on the point, noting someone like Dani, who has worked at the hotel for ten years, brings to the task of social media engagement a depth of knowledge about the hotel that lets her answer inquiries fluidly and with an understanding of the hospitality business that a young intern would be hard pressed to match.

Communicate With Your Guests How They Prefer

Asked why the hotel is so “social”, Curran said, “We try and allow our guests to reach us however they’re most comfortable.”  He noted that the hotel’s closeness to Silicon Valley also makes digital communication even more important.

A Secret to Social Media Success?  Buy in from Management.

Asked how they were able to be so agile and engaging in social, Curran was quick to credit support from the hotel’s general manager as the key.

Curran, who was also quick to credit Ortega with being the hotel’s social media voice, noted that very often the biggest impact comes from responding in real time to a guest who may tweet about having run out of chocolate chip cookies during a conference or needing an extension cord.  “We deliver what’s asked for when it’s asked for the best impact,” he said.

Stay On Top of Social By Attending Conferences, Reading Books & Listening to Webinars

Both Curran and Ortega credit part of their social media success with ongoing training.  “We attend some social media events, read books on the subject and listen in on webinars,” Curran said.

Ortega noted that she tries to promote other local tourism sites via social media as the sites promoted are often quick to reciprocate.  “It’s good for everyone,” she said, conveying a strong sense of devotion to the city.

The ROI of Social?

Though both Curran and Ortega said that the ROI of social has much to do with being an extension of hospitality and making guests enjoy their stay more, Curran noted,  “When someone visits our website from one of our social platforms, they are four times more likely to actually book a room at the hotel.”

“We’re sensitive all the time about the privacy of our guests.  There are times I’ll even ask a guest or a group what their preferences are regarding (public) social media conversation,” said Ortega.


Two very engaging people with a deep commitment to hospitality and service, Curran and Ortega do a beautiful job of providing a beautiful hotel with an especially warm and inviting social media presence.   "I'll be back!"