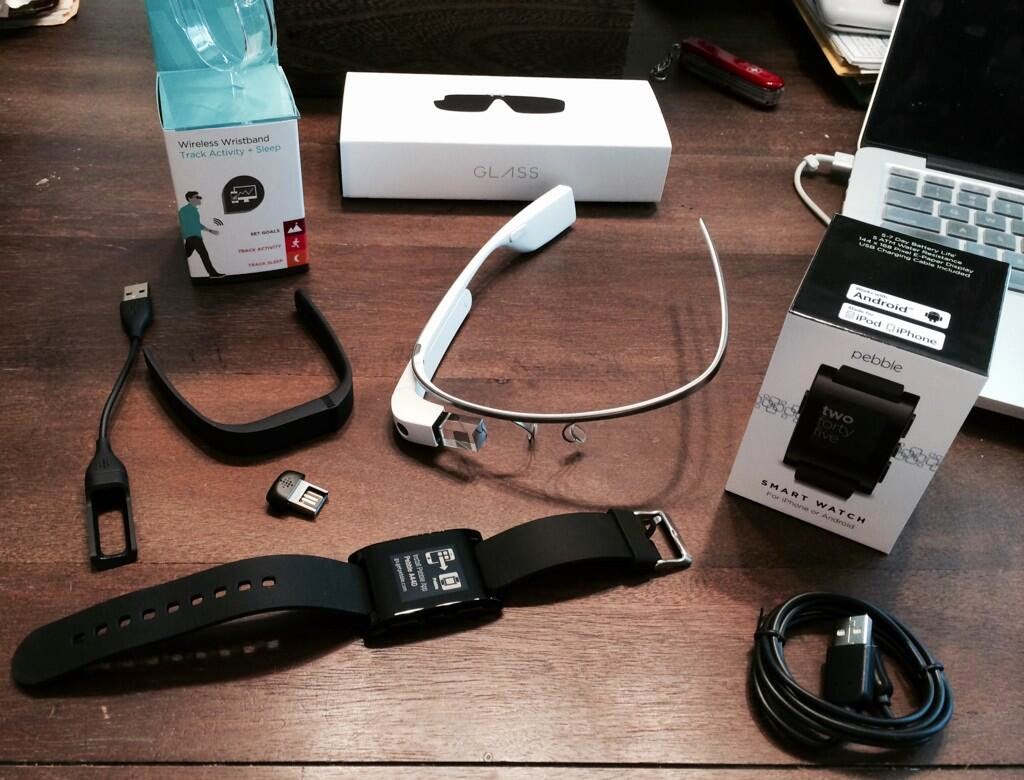 I am a "Google Glass Explorer" (translation: I coughed up $1,500 to get Glass early, in beta).  I understand that it's not really fair to compare a simple activity tracker, fitbit, with a "ask-it-to-do-anything" wearable device like Google Glass, but, here it is.

I have been wearing Google Glass for about a year now.  I only recently got a fitbit (and a Pepple smartwatch).  I have waxed poetic in the past about my problems with Glass, but, also, just found improved connectivity with my Glass which, I hope, means a whole new, possibly positive experience with Glass.

But, back to my assertion that fitbit beats Google Glass in user experience.  It's the simple things that count.  Glass has created an online "Explorer" community where we Explorers can share our experiences, network, and the like.  That's a part of the Glass user experience and it's a positive one.  Yet, what I am talking about, is something more proactive, small, but, big.

Like I said, I am new to fitbit.  So, I was delighted to receive the following email from fitbit:

The "Little Things" Are Generally "the Big Things" in User Experience

So, yes, I'm excited about a stupid, little reminder I got telling me that the battery level on my fitbit is low.  "Big deal!"

To me, it is a big deal, because as a new user the email just helped me continue my daily tracking that would have been interrupted if I hadn't gotten the friendly reminder.  I also like how the email walks me through the process of recharging my fitbit.  And, there is an unsubscribe link for when I become more fluent in my fitbit use.

A while ago, my experience with Glass improved when Google Glass finally created an iPhone app that comes with some very friendly walk-through videos.  Still, I don't recall every having received a very simple email like this from Glass on anything.

For example, since it seems that I was alone in complaining about Google Glass connectivity, it would have been really nice to have gotten an email from Glass saying, "Hey, we've heard that more than a few of you have been having problems with Glass connectivity.  Here's what we're doing to try and address this....  And, here are some suggestions on what you might do in the meantime to improve your Glass connectivity:  outline the steps like fitbit outlined the recharging instructions.

The More Complicated Your Wearable Device Is, the More You'll Need to Pay Attention to "the  Little Things"

If you are putting together a really ambitious, do-everything wearable device, please don't forget "the little things" in helping your would-be loyalists through the baby steps. 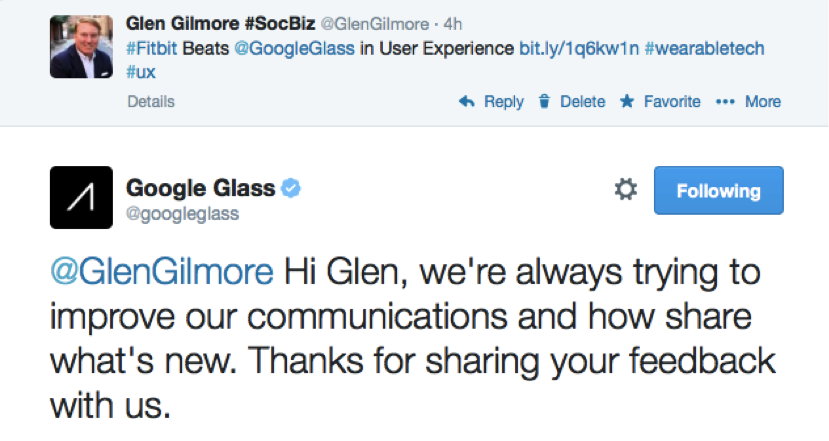 Kudos to Glass for being social, gracious, and responsive.

Despite my very public venting when it comes to Glass, I do maintain an abiding faith that Glass WILL only get better with time and, eventually, be the sort of wearable tech that most will want.

Why do I say this?  Simply, because the people at Google are really smart and passionate about innovation and product improvement.

It is crazy for Google to come out so early, even in beta, with a heads-up wearable tech device when that device so obviously needs numerous improvements...Or, is it.

It's finally dawning on this Glass Explorer that Google is merely heeding Eric Ries', Lean Startup model that counsels innovators to launch their MVP (minimum viable product) and start collecting "the maximum amount of validated learning" from customers to quicken improved iterations of the product.  It's certainly not the neatest way to launch a product, but, it is a way to quicken the learning curve for developers by providing them with a bounty of feedback from users -- users who clearly understood when they signed up for the program that they were signing up for a beta product, an MVP....

So, as a tweet from Glass has made me ponder a little bit more about my relationship with Glass, I think I've had an epiphany that makes me feel a bit better about the whole process.  Who says a tech giant can't also be a lean startup?!