So, what are we to think when a major fashion designer sends out a tweet, as a major military intervention in Syria by the U.S. looms:


"'Boots on the ground' or not, let's not forget about sandals, pumps, and loafers. #Footwear

Kenneth Cole, namesake of the Kenneth Cole fashion house, describes himself in his Twitter profile as, first and foremost, a "Designer", but also as an "Aspiring Humanitarian" and "Social Networker in training". 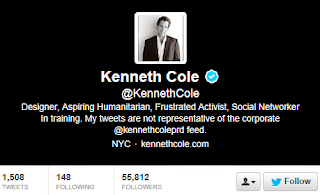 So, was the tweet about "Boots on the ground", "sandals, pumps and loafers" in the store, the poor judgment of a crass designer looking to hawk his wares, the plaintiff voice of an "Aspiring Humanitarian", or the stumble of a "Social Networker in training"?

Kenneth Cole was quick to answer the controversy stirred by his "Boots on the ground...sandals, pumps and loafers" in the store tweet.  His very next tweet, sent within six hours of the controversial one, directed viewers to his Instagram video response:

For those skeptics who thought that by including the hashtag, #Footwear, Kenneth Cole was more likely than not merely looking to sell a few more "sandals, pumps and loafers" by cashing in on the specter of armed conflict - wrong.

Or, at least, that's what Kenneth Cole would like us to think.

Let's have a closer look at Mr. Cole's response:


I have always used my platform to provoke dialogue about important issues, including HIV aids or homelessness.  I am well aware of the risks that come with this approach, and if this encourages further awareness and discussions about critical issues, then all the better.

Hhhmm.  "Boots on the ground" or not, let's not forget about sandals, pumps, and loafers" #Footwear

Did we really need Mr. Cole's tweet to call awareness to the issue or to encourage discussion about military action that is dominating every news headline and being debated on nearly every news show and coffee shop?

Comments posted to Cole's Instagram video explanation range from "Power to you. #stirthepot" to "Wow. I am genuinely impressed by the magnitude of bull**** in this video. Bravo, sir."

Kenneth Cole Lost Me at #Cairo

I must confess that my view of the this entire controversy is tainted by my familiarity with a much earlier Kenneth Cole tweet.  In fact, it is a tweet that I always use as an example of social media selling gone bad in a module I teach at Rutgers that touches on crisis communications.

I used to be a fan of Kenneth Cole, the man, the company.  When, however, in the midst of some of the fiercest fighting in Cairo, on a day in which the hashtag #Cairo was trending on Twitter as thirteen protesters lost their lives in the struggle for freedom, Kenneth Cole sent out a tweet that he later described as being an "attempt at humor":

We weren't intending to make light of a serious situation...Okay, maybe we were

Mr. Cole's "Boots on the grounds".... "sandals, pumps and loafers" in the store tweet sounds strangely familiar...as does his no-apologies response.

In the dust of the #Cairo fiasco, the social media site Mashable carried an apology from Mr. Cole, shortly after a tweeted reply declaring that they Kenneth Cole had not intended "to make light of a serious situation" failed to calm the storm.  (No attempt here to distinguish the founder, Kenneth Cole, from the fashion house, Kenneth Cole.)

Contradicting the first explanation of the #Cairo tweet, Cole, according to Mashable, later offered an apology on his Facebook page:

"I apologize to everyone who was offended by my insensitive tweet about the situation in Egypt. I’ve dedicated my life to raising awareness about serious social issues, and in hindsight my attempt at humor regarding a nation liberating themselves against oppression was poorly timed and absolutely inappropriate."

Humor and the Loss of Life Don't Mix

"Think before you tweet."  Simple enough as a basic rule for minimizing the risk of a social media crisis.

Mr. Cole wants us to believe that he did think before he tweeted:


"'Boots on the ground' or not, let's not forget about sandals, pumps, and loafers. #Footwear "

As in the immediate aftermath of his #Cairo tweet, Mr. Cole has also once again reminded us of his pedigree of social activism.

Perhaps as with his #Cairo tweet, we will later learn that this, too, was another attempt at interjecting humor in addition to sparking discussion.  I would have thought, though, that Mr. Cole would have learned by now that humor and death do not mix well.

While Mr. Cole's Twitter profile asserts that his "tweets are not representative of the corporate @kennethcoleprd feed" I find myself hard pressed to separate the two, as Mr. Cole has thoroughly blended the two.

There have been times in which I have wondered if have been too rash or harsh in my feelings towards Kenneth Cole, the man and the brand, following the #Cairo fiasco.  This latest episode assures me that I have not.

Be "Aware of the Risks"

Mr. Cole insists that he is aware of the risks of his tweeting.

And, he has, in fact, always promoted a social edginess that might make others uncomfortable.

In two grave moments of life and death, however, he has chosen to seemingly promote his products with a trending topic, only to chide us for any offense we may have taken, by reminding us of his social pedigree.  I am glad that he is "aware of the risks" of how he chooses to use his social media platforms, as this consumer has had enough.

As the founder of a company, Mr. Cole can take his company where he will in his tweeting.  I trust that this, too, is part of his awareness.

Thank you, Mr. Cole, for once again reminding us of your social pedigree -- and of the risks of tweeting what you will.

How NOT to Use Hashtags and RTs in a Crisis