*The writer is an honorary member of the Mercer County Central Labor Council, NJ,  AFL-CIO
1.  Sharing Multi-media to Tell a Story
A picture may be worth a thousand words -- but a video is even better: 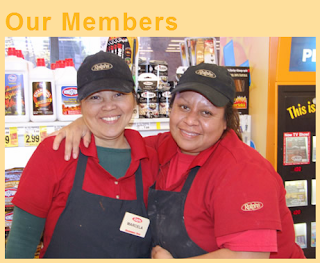 4.  Reminding Members of Marches and Rallies

7.  Reaching Out To Other Locals And Connecting

13.  Using Their Profiles to Bring Viewers to Their Blogs & Main Sites

14.  Using Their Tweets to Promote Other Social Media Accounts

How Unions Could Do Better On Twitter
If anyone should be good at being "social", it should be unions.  It's their lifeblood.  Yet, it's here where some unions are falling short.  How?
The biggest mistake some unions are making is to simply be absent from social media, creating a void that lets their opponents dominate the arena.
And some who are there would be better served by embracing some the medium's basic social gestures, like following back those who follow it, so a better bond can be created and communications fostered.  (You might even get a hot tip or two when there's an ability for private conversation, which requires mutual following.)

The United Food and Commercial Workers International Union boasts in its Twitter profile that it "represents 1.3 million workers in the U.S. and Canada."  Yet, the UFCW only follows 357 accounts and only garnered a meager 1,970 followers.  If it encouraged its members to participate in social media, it could magnify its voice within the medium in a major way, allowing it to carry its message more effectively.

There's also not much retweeting going on, which means that union accounts are missing out on one of the easiest ways of building new connections in social media, which is through sharing great content from others.  When retweeting occurs, the favor is often returned, allowing messages to travel much farther than they would otherwise.  One accounts that gets this right belongs to the @AFL-CIO
Others have created accounts, but have let them sit dormant -- for years.

Also, letting others take your primary territory is never a good idea.  Name squatting occurs on Twitter.  When it does, every effort should be made to regain the ground by filing a formal complaint so that a primary name is not simply wasted by someone who might or might not have a malicious intent. 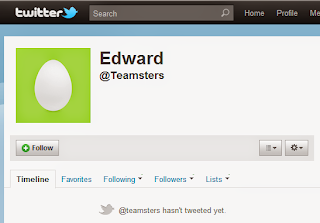 Also, the first step in creating a strong social media presence is completing an account profile:  uploading a profile picture, setting an eye-catching background design, filling out a biography that has keywords to aid in search and information that helps viewers understand what the account represents.  Links in the profile also help viewers get to sites rich in detail and connections.  Not taking these steps misses an important opportunity. 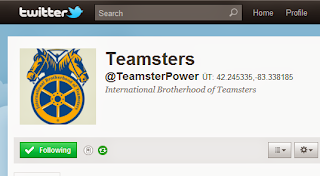 As with so many businesses, unions are creating a presence on Twitter and still finding their way.  Once they do, the conversation of the forum will become even more vibrant.
Please join me on Twitter:  @GlenGilmore
Posted by Unknown

Thank you for writing informative content. I’m impressed with your capability to write persuasive material. you have supplied me lots of thought-provoking views to consider.
jerseys cheap
cheap football jerseys

If you are searching get more instagram followers free fast for cheap insurance quotes,